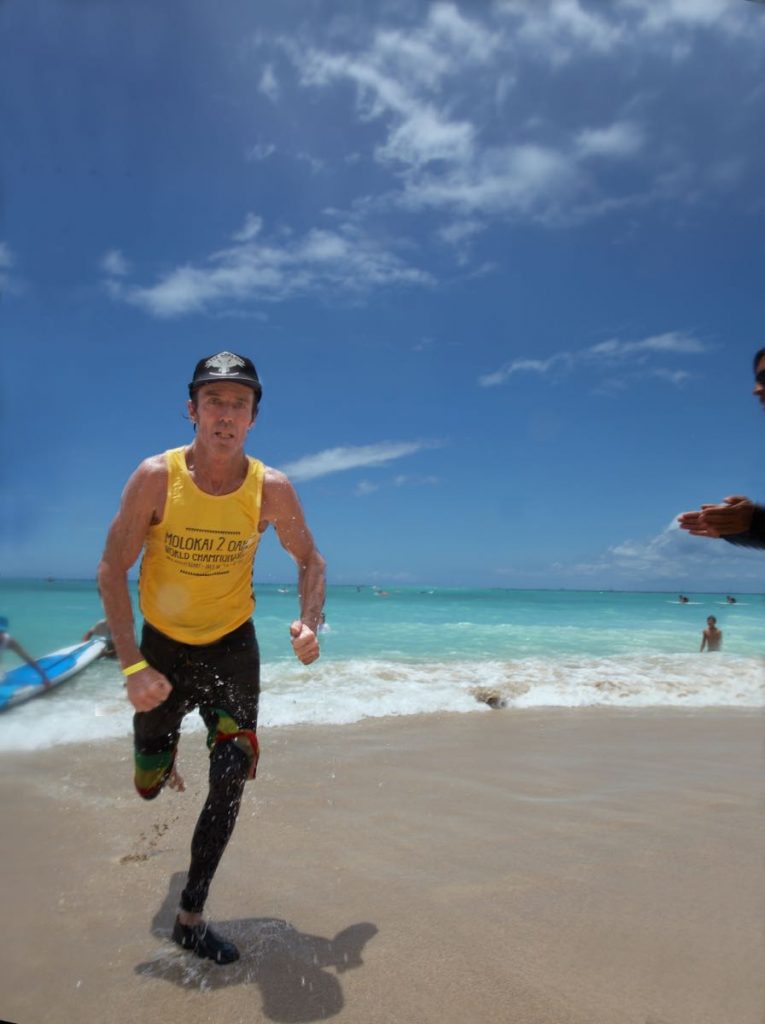 Chris Owens is a lifelong surfer resident of Oahu. He has been competing in the Hawaii Paddleboard Championship Duke’s Race since it’s inception. This year he shared a narrative as a first person commentary while on the race course. While on this 2-hour long endurance event, every participant’s journey is different yet it is a race event and does require both mental and physical stamina. This is Chris’s story from the 2016 race.

Yesterday I raced in the Hawaii Paddleboard Championship, A.K.A. “Duke’s Race”.   Surprising to me, I noticed a large amount of unlimited class boards in this race, Australian Dean Hanmer a former top competitor in the M2O was among them. I ended up taking 4th over all, with a knarly battle with four stock paddlers. At first, it was Hunter Pflueger, outside and I on the inside line, then I started hearing this voice saying “Go Chris Go!”, I never look back, keeping focus on the little bumps we had, then all of a sudden, Kai Hall pulls up on the side of me, we started chuckling, oh it was you ,I said, Kai said; ya hey how’s our direction, I said, good! just keep surfing out a little to get in the wind. Then Kai passed me. For myself, I didn’t really have the steam in me, I’ve had this terrible insomnia ever since I recovered from the Molokai, and last night ,I only had two hours of sleep. So after Kai , I stayed on my line trying focus on staying on my knees as long as possible, then all of a sudden, like out of no where, Matt Sack is to the right in front of me, he crossed in front of me and joined behind Kai and Hunter, who was leading the traditional prone paddleboard race. I told myself I need to wake up and I shifted gears, got moving and was able to pass Matt eventually .A lot of times it takes me about two miles for me to loosen up from the stress of the start. But today was different, it sucks not to have enough sleep before a race. So I finally started to move my unlimited class board, the way they should be for a while and felt like I started to gain on the leaders in front of me. Until another stock paddler caught up to me at Diamond Head Lighthouse, then I forgot about Hunter and Kai,holy shit another stock threat, I don’t remember his name right now, but me and this ‘young man” had a race, for a while I remained ahead of him until I heard him yell watch” out, that was cool of him ,he covered me on taking one on the head at Sleepy Hollow”, you think your outside, but it will always standup outside of you and try to get ya, its ruined many paddleboarders in the past. So after that we were side by side, until I heard him yell again, I see him going for a wave a “Old Mans”, I turned too, it was a nug, but he was too far on the channel, I was the only one who caught, it sent me gliding left for a while, but the perseverance of that guy payed off and joined me again, coming into the buoy marker that we to round before heading straight into Kuhio Beach, we were side by side, then we caught the same wave in then caught another one together, sometimes you could say, wave riding in isn’t that fair, because its luck, and sometimes you can pass someone who is way ahead of you, but this was even playing field with two different paddleboard class, I got to admit, I do a lot of paddleboard beach run-ups, I train that way, when we hit the sand, I was spot on, ahead of him up the beach shoot, then he passed me at the end by about an inch, we immediately high five, that was the last I saw of him, me? -I hit the ground, praying to the sand,”upchucking”, I really thought I was dying, I made it to my feet, stumbled over to the green grass area, then I just laid there for a while. Isn’t it funny how far we take it, just to have fun. But sincerely, I love it, and will never quit as long as still can still do it. Hunter Pflueger is the Champ and its the first time, I’ve seen three stock paddlers place in the top three and beat all the open/unlimited size paddleboarders. At a young age, I would say Hunter is definitely ready for his first Solo Molokai race and I believe he will be a champ some day, He’s Hawaii’s future in Paddleboarding right now, Again I would like to thank Carl Kim for putting on another great race, watersports announcer Beau Hodges and for all the volunteers who helped make it happen. Mahalo, and oh yes, welcome back, e’komo mai paddleboarders Justin Langlais and Dean Hanmer.”

That concludes Chris’s unique race day story. If you would like to share your race day experience, please CONTACT US as we might like to publish your story. Our worldclass race is one of the most enjoyable paddleboard races with a beautiful course starting in Hawaii Kai and finishing in Waikiki, the Motherland. Get your paddleboard or SUP and start your journey next August! Learn more about our ANNUAL EVENTS.